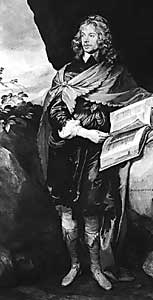 Warren Road slices through the site of a second, grander house built in 1622, which replaced the original hall or manor house where John Suckling Jnr. was born in 1609.

In 1640, following something of a riotous life, Sir John Suckling; poet, gambler, cavalier and inventor of cribbage became involved in the plot to restore the power of the King over Parliament. This proved a disaster and led to his flight to France where destitute he died by his own hand in 1641. Suckling had sold his house in Whitton in 1635 to Michael and Richard Holman who had purchased a significant amount of land and property in and around Whitton village, including the fourteen acre farm once held by the bailiff of Isleworth Hundred, Henry Sanders (or Saunders).

In 1632 Edmund Cooke purchased two small cottages, which he demolished to build a mansion; the first of three to occupy the site of Kneller Hall. At this time there was taxation on domestic fireplaces known as The Hearth Tax. In 1664, Cooke’s mansion was assessed for 20 hearths, making it the fourth largest house in Twickenham parish.

When assessed in the same year, Sir John Suckling’s house boasted 19 hearths. By this time it was empty and was eventually sold in 1671 to Lord John Belasyse (or Bellasis) who fought for the King in the Civil War; re-emerging into public life at the Restoration only to resign his appointment as Governor of Tangier because of his faith. He was then imprisoned in the Tower of London falsely accused of raising a Catholic army.

When James II succeeded in 1685, Belasyse again found favour. A year later he leased some land to the King’s army camped on the heath south of Whitton village for a hospital. Although placed in the area of Hospital Bridge Road, the name is evocative of a much later isolation hospital north of Bridge farm. Two years before he died in 1689, Lord Belasyse moved to a new house he had built due east of Suckling’s old house, which was sold to Viscount Falkland. In today’s terms, the new house stood directly opposite the frontage of Whitton Hall.

By this time, Whitton had emerged from the feudal system little changed since the Norman Conquest. The monopoly of the manor with its bailiff, and the large expanses of common land and the strip field land pattern were making way for private ownership and large, residential estates. The numbers of farms and people owning them was increasing, but Whitton was still a tiny crossroads village when The Age of Romance arrived and the indulgencies of the educated elite.