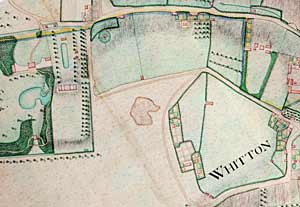 The first precise reference to Whitton comes from an undated grant by Thomas de Valery, the Lord of the Manor who died in 1219. Mention is made to Radulfus, son of Gilbert of Whitton, which clearly indicates ownership going back into the 12th century and in all probability much earlier. Whitton sat with the village of Heathrow in the parish of Twickenham as part of Isleworth Hundred. This Domesday Lordship also included the parish of Isleworth comprising Brentford, Worton and Whitton Dean, and Heston parish consisting of Heston, Sutton, Lampton, Northfield, Scrackidge, Cranford and Cuckold’s Haven; the source of the brook that formed the ancient natural boundary that still delineates the London Boroughs of Richmond upon Thames and Hounslow.

In common with any emerging human habitation, the high ground was sought by the fittest both for security and as a safeguard against flooding, which was still prevalent in and around Whitton up until the first decades of the 20th century. The highest point in Whitton is midway along Warren Road. The area occupied by Kneller Hall is next, and then west along today’s Kneller Road towards the Hounslow Road where the land dips to the north into the line of the ancient brook that ran open along Whitton Dean until the 1930s. Where the village is situated today at the crossroads of Kneller and Nelson roads and Whitton Dean is where Whitton’s story begins.

By 1480 there was a large house with a courtyard, which existed in Whitton throughout the middle ages and into comparatively recent times. At least by 1607 the system of roads described earlier was in place, with a track following the course of modern day Percy Road. By 1634, the layout of Whitton village would be as recognisable to our Stuart forebears as it is to us on Moses Glover’s map of that date.