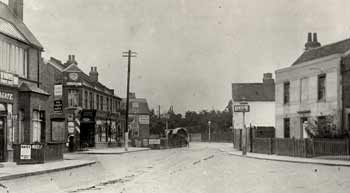 Whitton village by 1910 was much as we see it today with its shops and cottages around The Market Place on entry from the direction of Kneller Hall. The terraced housing fronting the northern side of Nelson Road towards The Admiral Nelson looked out on open fields. Overgrown and neglected, Whitton Park stretched from Holly Bush Corner north along the Hounslow Road. Turning east by Whitton Church, Kneller Road and Cedar Avenue were developing house by house. Colonial Avenue was two thirds built backing onto the ten acres of Whitton Dene where the Duke of Argyll kept his mistress and which was destined to become Murray Park in 1914. The smithy next to the White Hart was still kept busy mending cartwheels and making carriages.

The acute housing shortage following the First World War saw ‘Homes for heroes’ filling the gaps in Cedar Avenue and Colonial Avenue. Drawing inspiration from the Garden City Movement in providing design and landscaping for working class housing, Kneller Road leading into Prospect Crescent provided high quality, attractive homes. But full-scale development of Whitton could not begin until the problem of access was resolved. In this, Chase Bridge was key. Only after its compulsory purchase in 1928 was the first omnibus able to link Twickenham with Hounslow and all points west. Within five years the new A316 Great Chertsey Road had reached as far as Hospital Bridge Road, affording ease of access for the developers. Percy Road, from Whitton station to the Admiral Nelson, became the High Street and soon all of the land south of the new Warren Road was covered in housing. 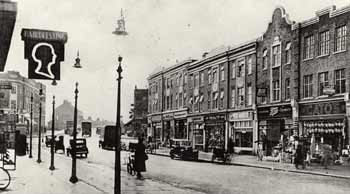 During the First World War the Powder Mills worked flat out on munitions. Since replaced by Crane Park recreation ground and with no industrial connection come the second great conflagration, Whitton was not a direct target for German bombs but it did suffer from random attacks.

The main bomb damage occurred between September 1940 to March 1941 when bombs fell on Hazel Close, Redway Drive, The Ridge, Kneller Road, Bramley Close and Hounslow Road.  The junior section of  Nelson School suffered a direct hit in November 1940 and later another bomb left a large crater in the front playground. The Catholic Church of St. Edmunds in Nelson Roadwas hit by an incendiary and burned to the ground. In June 1944, Whitton suffered its first attack from German flying bombs when a V1 fell in the High Street, killing a number of people and destroying five shops and damaging 60 others. The blast was felt as far as Nelson School, which sustained damage to its frontage. Together with attacks from V2 rockets, 46 houses in Whitton were lost and a further 232 badly damaged.

The post war years through to the 1960s saw the arrival of St.Augustine’s Church off the Hospital Bridge Roundabout. Neighbouring Whitton School, Chase Bridge and St Edmund’s school in Nelson Road joined Nelson and Bishop Perrin to cope with a burgeoning population. What few older houses flanked the Admiral Nelson in the High Street made way for a stereotypical 60s retail block. The Odeon cinema opposite survived until 1970 when it was demolished. The fine Gothic vicarage of St Philip and St James was torn down to make way for an old people’s home, which itself has been replaced with a private sector facility.

In 1937 Twickenham Borough was enlarged to include the neighbouring Urban District councils of Teddington, Hampton and Hampton Wick. In 1965 the Borough was devolved into a new London Borough of Richmond upon Thames wherein the debate continues with Royal Mail as to Whitton’s postal identity.