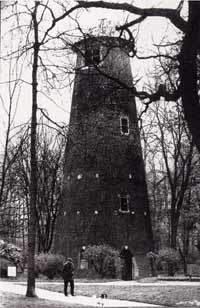 At the close of the 18th century little else had changed in and around the village of Whitton, unlike the fate of the big houses and their estates. The former Suckling house was now Warren farm, with probably little or nothing left of the grand mansion. The new owner of Whitton Hall, Samuel Prime, made many additions to the house and demolished Lord Belasyse’s house in order to improve his view and create a pleasure ground. Otherwise, an increasing amount of open land around Whitton was becoming common or enclosed market gardens, nurseries and orchards. The only manufacturing industry took the form of gunpowder production along the banks of the River Crane between today’s Hanworth and Hospital Bridge Roads.

Probably the site of a medieval corn mill, Edmund Hill converted it to the manufacture of Gunpowder 1766. By the time he retired in 1800, it had made him a millionaire. Although the Mill was virtually isolated on Hounslow Heath, of the many explosions that took place there, Horace Walpole mentions one in 1772 when his windows were broken at Strawberry Hill.

The firm of Curtis and Harvey acquired The Powder Mills in 1820. By this time a well-established track known as the Hounslow Heath Road followed today’s High Street and Percy Road towards Whitton village. What is now Nelson Road also ran off the Heath from the direction of Heston to wind its way into the village and join the Twickenham and Richmond Road (now Kneller Road) running east towards those towns and west towards Hounslow. Whitton Dene directly ahead led in the direction of Brentford.

In and around Whitton village, the artisan cottages still seen today gradually replaced older buildings. Eccentric philanthropist Louis Kyezor, “The King of Whitton” built most of these cottages in the early 1860s to accommodate Whitton’s growing working class population. The colourful Jewish entrepreneur was shot dead in the street by one of his tenants living in Whitton under an early witness protection programme as the chief informant of The Cato Street Conspiracy, which set out to murder the entire cabinet and then seize the Bank of England.

Whitton’s first school opened in 1851 in the grounds of Kneller Hall. Demolished in the 1960s, this modest, single storey structure provided elementary education for 224 children and was used as a meeting house for the City of London Mission whose assembly included two reformed men who were once “a terror to almost all in the village.” The first post office was established in 1855 opposite The White Hart. The Red Lion (now demolished) was built at the other end of the village before 1819 and was joined by The Admiral Nelson and The Prince Albert Beer Shop about 30 years later. The Duke of Cambridge first opened its doors in 1857 when the population of Whitton had risen from 120 in Suckling’s day to around 470.

Of the large houses, Whitton Hall had been demolished and rebuilt for the third time, much as we see it today. In 1850 it adopted the name of Kneller Hall and was used as a teacher training school. Seven years later the house was transferred to the War Department and opened as The Military School of Music. The Duke of Argyll’s moated garden estate had by now been split into two halves with the Palladian villa occupying the eastern half of the estate. Known as Whitton Place, it was demolished in 1847 together with the villa Argyll built for his mistress at Whitton Dean (now Murray Park). The Duke’s original greenhouse had long since been turned into a house, forming the western half of his original garden and was known as Whitton Park – the name adopted when the whole site was re-united by the new landed gentry in the form of George Gostling, his wife Anne and their 19 children were now the new landed gentry.

As the population of Twickenham increased during the 19th century so new churches were opened. The vicar of Twickenham and Louis Kyezor instigated the provision of a church for Whitton. The Gostlings gave land formerly “the resort of tipplers, swearers and all sorts of vagabonds” and the new ecclesiastical parish of Whitton was created in 1862. In that same year the church of St Philip and St James was built.

Market gardening in Whitton and Twickenham reached its zenith in the 1870s. The route from Twickenham to Isleworth was lined with orchards, fields of fruit of all kinds and flowers. Produce was carried in head loads of 40lbs principally by women to Covent Garden each day during the season. Until Kent took the mantle, Whitton and the surrounding area was known as the garden of England. After 1900, it was almost all gone. Bridge Farm at the northern end of Hospital Bridge Road remains as a unique reminder.