A HISTORY OF WHITTON AND HEATHFIELD
by Ed Harris 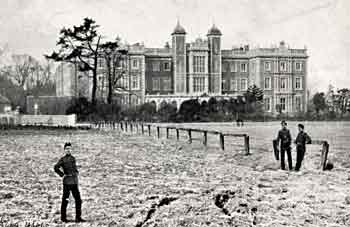 ‘Whereas a natural and clearly defined boundary between the two areas is the stream crossed by the Chase Bridge – any other would be an arbitrary one; confusing, inconvenient to persons on both sides of the boundary.’

So concluded a lengthy bout of correspondence between the Commandant of the Royal School of Music at Kneller Hall and the General Post Office from 1912 until September 1914 when a more ominous event overtook the parochial concerns of postal and telegram services.
In the Commandant’s view, Twickenham and not Hounslow should serve Whitton. From the GPO’s perspective, The Duke of Northumberland’s River clearly delineated the Hounslow / Twickenham border, despite Whitton’s administration under Twickenham for over 700 years. Thus is Whitton’s precarious place in local history.

Whitton is a textbook Anglo-Saxon name meaning at the turn or bend of a river or geological feature (Whit) and small hamlet or homestead (Ton). Bordering Hounslow Heath to the west, the hamlet of Whitton was flanked north by a substantial brook and south and east by a small river. The ‘natural’ boundary between Twickenham cited in the GPO’s communiqué to the Commandant of Kneller Hall is in fact the artificial cut constructed after the dissolution of the monasteries in the sixteenth century and long since known as The Duke of Northumberland’s river.

Read more about Whitton through the ages: