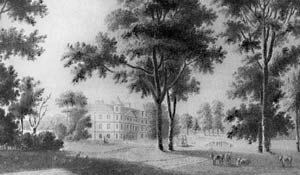 The first half of the 18th century was dominated by Alexander Pope (1688-1744) who came to Twickenham in 1719 and lived in his riverside villa in Cross Deep until his death.

Pope was a poet, satirist, translator, and an influential figure in the development of landscape gardening. His house has long since disappeared although the name remains in use, but his grotto, although stripped of the exotic decoration on which he lavished so much care, is still extant.

Three years after Pope’s death, Horace Walpole bought a small house in Strawberry Hill which, over the following 40 years, he was to enlarge, embellish and decorate in a style which became known as Strawberry Hill gothic.

Walpole was a collector and antiquary, essayist and novelist (his ‘Castle of Otranto’ was the first gothic novel), but above all an outstanding letter-writer, chronicling the national and local political and social events of his time. Strawberry Hill house remains one of the few survivors of Twickenham’s golden age.

Other notable figures of the period include Lady Mary Wortley Montagu, also a prolific letter writer, Henry Fielding (briefly resident in Twickenham at the time he was writing ‘Tom Jones’), the artists Samuel Scott and Thomas Hudson (with Sir Godfrey Kneller a near neighbour in Whitton), and poets Paul Whitehead and Richard Owen Cambridge.