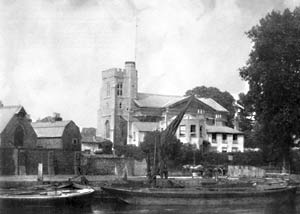 The earliest residential development is likely to have been around St Mary’s Church which is situated on a natural promontory by the riverside. The present church has a 14th century tower and early 18th century nave, the result of rebuilding following the collapse of the church in 1713. The first dated vicar is William Browne in 1332 but he certainly had predecessors.

Early development also took place in 1227 when Richard, Earl of Cornwall, enclosed a large area of natural heathland in what is now the St.Margaret’s area to form Isleworth, later Twickenham, Park. A hunting lodge was built in 1375 and a more substantial house in 1561; it was this house where Francis Bacon lived from about 1580 to 1608 and as we shall see, he was one of many major literary and artistic figures associated with Twickenham. 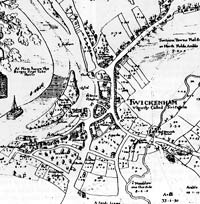 Moses Glover’s map of the Manor of Isleworth shows Twickenham as heavily built-up around the riverside area of Church Street, with development along King Street and the main street layout of today already in place. By 1664 the Hearth Tax records show Twickenham’s population to have grown to 1015 with 218 houses of which 11 were large enough to contain between 15 and 37 hearths.

In the latter part of the 17th century and still more in the 18th, Twickenham became a a favoured area for the houses of the nobility, merchants and other wealthy residents, poets, writers and artists. The village was free from the pollution of London, pleasantly situated by the Thames and easily accessible from the city along the north bank of the river. In 1720 John Macky described Twickenham as a ‘village remarkable for an abundance of curious seats’.