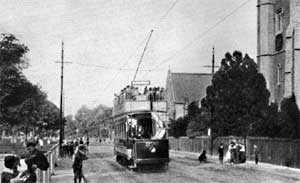 Trams were introduced in Twickenham in 1903 and buses in 1910; trolleybuses came into service in 1931 running initially from Fulwell depot to Twickenham junction. The increase in road traffic led to the construction of the Chertsey Road by-pass in the early 1930s and Twickenham Bridge in 1933, and road widening in 1928 led to the demolition of the whole of the south side of King Street.

As Twickenham’s population grew, so did the need for effective local government; in 1926 Twickenham became a Borough, the council acquiring York House as a replacement Town Hall. In 1937 the Borough was enlarged to bring in the neighbouring Urban Districts of Hampton, Hampton Wick and Teddington, and in 1965 the Borough became part of the new London Borough of Richmond upon Thames.