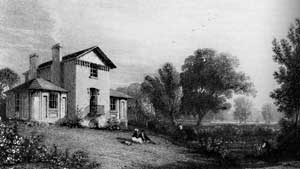 The literary and artistic connections continued into the 19th century most notably with JMW Turner whose house, which he designed and had built in the early 1800s still stands in Sandycombe Road. Charles Dickens spent the summer of 1838 at 2, Ailsa Park Villas in St Margaret’s and features Twickenham in several novels. Alfred Tennyson lived in Chapel House in Montpelier Row from 1851 to 1853, and RD Blackmore, author of ‘Lorna Doone’ was a master at the Wellesley House School in the Hampton Road in the early 1850s. 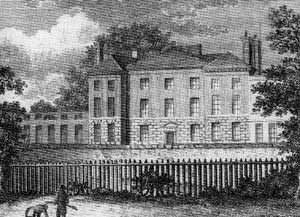 Throughout the 19th century Twickenham had a strong connection with the French royal family. In 1800 the Duc d’Orleans and his two brothers sought exile in England, living from 1800 to 1807 in Highshot House in Crown Road. He returned in 1815 this time living in Orleans house for 2 years. During the 1860s three of the late Duc’s sons were living in the area – the Duc d’Aumale at Orleans House, the Prince de Joinville at Lebanon House, and the Duc de Nemours at Bushy Park – while one grandson was living at York House and a second across the river in Morgan House. The connection lasted until 1900 when the Duc d’Orleans moved away from York House where he had been living since 1896; fleur de lys still decorate parts of the building as a reminder of the Duc’s residence. 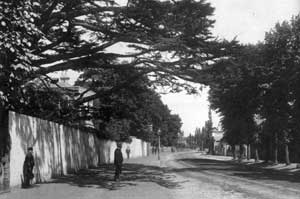 But the 19th century also saw the growth of suburbia with the focus on more modest but initially still substantial houses for the steadily growing population – a seven fold increase from 3,000 in 1800 to 21,000 in 1901 (rising to a peak of nearly 53,000 in 1951). Developments like Trafalgar Square (now Road) in the early 1840s marked the spread of housing to the west of the town, while the large estates of Twickenham Park and Cambridge Park were sold off for residential building later in the century. Large scale housing developments followed in the late Victorian/early Edwardian period, the 1920s and, particularly, the 1930s when much of the very extensive market garden , orchard and nursery lands were turned over to homes. 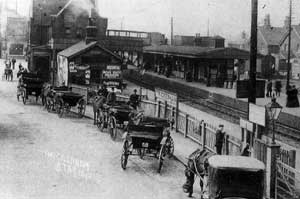 The coming of the railway to Twickenham in 1848 was a significant factor in the growth of population; Strawberry Hill station opened in 1873, and St Margaret’s in 1876 although Whitton didn’t get its own station until 1930.