A SHORT HISTORY OF TWICKENHAM
by Mike Cherry 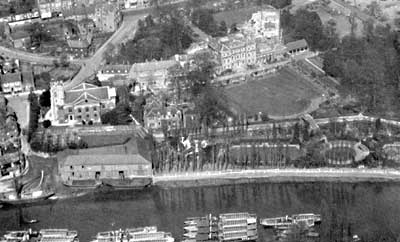 The history of Twickenham can be traced back to at least 704 A.D. when the name, then spelt ‘Twicanhom’, first appears in writing in a charter. The origin of the name is uncertain: ‘ham’ and ‘wic’ were Saxon words both indicating small settlements, while ‘hamm’ meant land in a river bend, dry ground in a marsh or river meadow, which could apply to the area between the Rivers Thames and Crane, parts of which were marshy. A link to a personal name ‘Twicca’ has been suggested but has no documentary basis.

There is however evidence of at least two Roman settlements, in the area of Amyand House and in Heathcote Road in St. Margarets; evidence of Neolithic settlement from about 3000 B C has also been found in the Church Street area.

Twickenham was included with Whitton, Isleworth and Hounslow in the Domesday Book of 1086, and although not idividually mentioned, it can be estimated that Twickenham had about 25 households and, with Whitton, occupied about 2355 acres of which about half was farmed in open fields – North or Town Field between the modern day Heath Road and Whitton, and South Field in the present day Strawberry Hill area.

Read more about Twickenham through the ages: