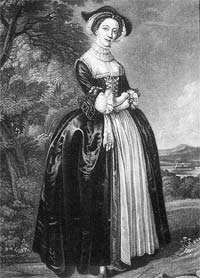 Between the 17th and 19th centuries Teddington became a popular riverside retreat among the gentry, echoing the popularity of neighbouring Twickenham. A number of large houses were built in the village during this time. Sir Orlando Bridgeman, Lord Keeper 1667–72, retired to a house he had built at Teddington, which stood on the south of the village. Banker, Sir Charles Duncombe (d. 1711), one of the richest men of his age, built the house later known as Teddington Place, in which he had ceilings painted by Verrio and carvings by Grinling Gibbons. The house stood just south of the present St. Alban’s church. Either it or another on the same site, latterly known as Udney Hall, was pulled down in 1940.

Udney House, also on the south side of the High Street to the west of Kingston Lane, bore the date 1768 and the initials I. K. It was chiefly remarkable for the fine collection of paintings made by Robert Udney (d. 1802). The picture gallery was demolished about 1825 and the house about 1899. Faversham House nearby, possibly built in the early 18th century, belonged to the same estate. Teddington Grove, in Twickenham Road, was built about the middle of the 18th century, possibly for Moses Franks, who died at Teddington in 1789. Franks was one of a group of rich and respected Jewish residents in the neighbourhood. Sir William Chambers designed an ornamental temple and greenhouse for Franks’ garden. The house afterwards belonged to John Walter (d. 1812), the founder of The Times, and was demolished after the First World War.

The only surviving 18th-century house of importance is Elmfield House, which has three stories and five bays, with a Doric porch added later. It is now used as local government offices. Numbers 163, 165, and 167 High Street are a row of two-storied cottages dated 1759 but possibly older. There are other survivals of the 18th and early 19th centuries in Park Road and the High Street and two or three much altered small 17th-century buildings in the High Street. Late medieval accounts speak mostly of tiled roofs, and also of one thatched house.