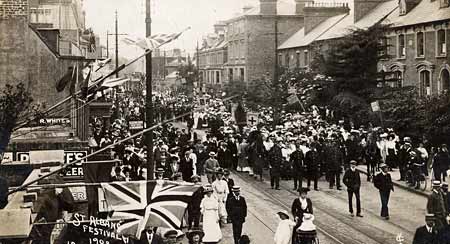 Trams had accelerated building around the Kingston Road. By the First World War most of the present streets were in existence and the remaining open spaces were being given over to other uses. The whole area west of Wellington Road was developed, with the exception of the small northwest corner across Staines Road, which became the Fulwell Golf Course in 1904. Between the two wars the former Udney farmland hosted the St. Mary’s Hospital Medical School Athletic Ground and the Harlequins Sports Ground. The Lensbury Club, belonging to the Royal Dutch Shell Group, was built in 1938 with large grounds on both sides of Broom Road. The local authority also provided much smaller recreation facilities such as the swimming baths in Vicarage Road in 1931.

Since it was established in 1902, The National Physical Laboratory at Bushy House also gradually extended its buildings farther into Teddington with grounds reaching up to the Hampton Road, Coleshill Road, and Queens Road. Now mostly covered with houses built more recently, one of the chief characteristics of the district is the mixture almost everywhere of buildings of various dates and types, from the yellow brick cottages of the early 19th century to the late 20th century gated developments. 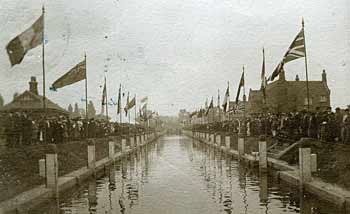 The High Street and Broad Street mostly bear 20th-century shop fronts. The Savoy Cinema built in 1937, replaced a smaller cinema on the same site and has itself been replaced. The first part of the building of the War Memorial Hospital was opened in 1929 when the old hospital in Elfin Grove was closed. Among the chief areas of building after the First World War was the local authority requirement to provide Homes for Heroes. These included 124 houses at Udney Park, 78 houses at Mays Estate, and 72 houses at Shacklegate Lane (built respectively in 1921, 1920–1, 1930). The private sector built estates on the site of Teddington Grove (1929–30), and in the extreme north-west of the parish round Rivermeads Avenue (1933–4).

In the High Street, the Royal Oak and the King’s Head were in existence by 1730. Although they are the oldest surviving inns, neither inhabits a building of any great age. The Greyhound Inn was built in 1730 and renamed the North Arms in 1790 after Lord North’s wife who had become Ranger of Bushey Park. When he became 2nd Earl of Guildford, the Inn was renamed The Guildford Arms in 1795, and on his death when the Rangership passed to the Duke of Clarence, it became the Clarence Arms. It was later rebuilt as the Clarence Hotel and after an extensive refurbishment programme in 1996, it reopened as the Park Hotel. Other short lived Inns which did not survive are the Three Bells, the Northumberland Arms and the Duke of Wellington. The Anglers’ Tavern appeared around 1850. By 1911 with its rapid growth in population, Teddington once boasted 24 inns, public houses and hotels.