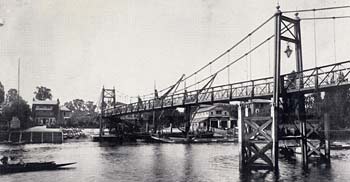 In 1861, although the parish contained over twice as many houses as in 1801, Teddington still remained little more than a village. Among the houses built between these dates was Teddington Hall, which was said in 1891 to have stained glass and bricks from the old Star Chamber at Westminster. It stands on the south of Hampton Road and now belongs to the National Physical Laboratory. Gomer House was built about 1858 by the novelist R. D. Blackmore.

By this time the railway had reached Twickenham and Kingston and there were omnibuses to London. The resultant slight middle-class development was soon swamped following the opening of the two railway lines through Teddington itself. The branch of the London & South-Western Railway from Twickenham to Kingston, on which Teddington Station stands, was opened in 1863, followed a year later by the Thames Valley Railway, with a station at Fulwell. A few years before the railway opened, the large estate of the lord of the manor had come onto the market, and by 1871, in contrast to the 254 dwellings 10 years earlier, the parish contained 1,034 houses. 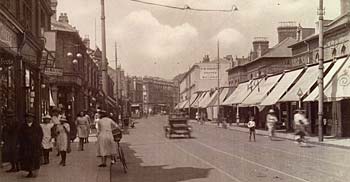 West of the station appeared what was called Upper Teddington, with small terraced houses stretching between Stanley Road and Waldegrave Road. Broad Street became a new shopping centre with shops of a more showy description than those of the mother village. The new Clarence Hotel was built in 1863 on the site of the Greyhound Inn (1730), St. Peter’s Church in 1865–73 and the old cottage hospital in Elfin Grove in 1875. To the north, the new cemetery opened in 1878. The Town Hall at the corner of the Causeway and Middle Lane, built in 1886, was privately owned and had a ballroom and a theatre as well as the local board of health offices until it burned down in 1903.

North of the High Street, where Manor Road had been laid out in 1861, houses appeared quickly but were more widely spaced. South, except for the area just east of the station, there was little building. Towards the river, St. Alban’s confronted the old parish church in 1888 and by the end of the century villas stretched more or less continuously along the riverside. South of Fulwell Station terraces and semi-detached houses appeared, adjoining the slightly earlier settlement of New Hampton outside the parish.

In the south near Hampton Wick there were no buildings at all before the gas-works in Sandy Lane were opened in 1851. After 1864, settlement grew quickly nearby and later became known as South Teddington. An Anglican school-church was provided in 1867 and a Roman Catholic one in 1884. By the end of the century the district was covered with houses south of Bushy Park Road. A scattering reached north along the Kingston Road where Normansfield private asylum for the feebleminded was opened in 1868. From well over a hundred patients in 1881, by the 1960s it had less than 200 and has subsequently been was sold off for housing development.

The pace of house building slowed during the 1870s, later increasing so that about a thousand new houses were built in each decade from 1891 to 1911. In 1886 a private omnibus service to Hampton Court was started, which was taken over by the London Suburban Omnibus Company in 1895. In 1903 the London United Tramways began a service along Wellington Road and another along Stanley Road, Broad Street, the High Street, and the Kingston Road. Motor omnibuses buses had appeared by 1914, after the tram service was said to have reduced the attraction of the larger villas, which had been built forty years or so earlier. By 1936 the trams had been superseded by trolleybuses. The tram-depot north of Fulwell Station survives as a bus garage.