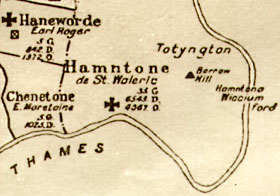 There were a number of main fields in the ancient days. The oldest was the west field, which bordered the river on the modern-day Oldfield Road on the north and stretched to the Sunbury border on the west and back to Hampton town on the east. Later the Waterworks were to cover much of this area. Very early on another large area was opened up north of the village. This was first known as the East Field and later as the Warfield, a name still preserved in Warfield Road. Oldfield was north of Westfield and adjoining Kenton Park, as it was then known, on the west and Oldfield on the eastern side.

The name [and much of the outline of the field] is preserved in the name and course of Oldfield Road and Priory Road. The sharp bend where the war memorial cottages are located in Oldfield Road makes the south­eastern corner of the Oldfield. To the east of the village lay the Eastfield. This arable land was to become part of Bushy Park in the early 17th century. It is mentioned in documentary evidence from 1257 until 1612 and was then incorporated into the park at about that time. 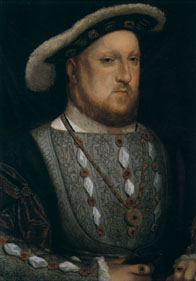 After the Norman Conquest of 1066 the country was divided into “manors”. The manor of Hampton was given to Walter de St. Valery and his family owned it until 1217. Between 1237 and 1514 it belonged to the Knights Hospitallers of the order of St.John of Jerusalem. In 1514 Wolsey purchased the lease and built the palace of Hampton Court. By 1529 Henry VIII had acquired the manor of Hampton and Hampton Court Palace from Wolsey.

River crossings have played an important part in the location of many settlements and Kingston Bridge, which has existed since around 1219, was probably responsible for the location of Hampton Wick. There was a ford where Hampton Court Bridge now is for many centuries, particularly used in the drier season and a ferry that existed from at least 1536. The first bridge was not built until 1753. At Hampton the ferry opposite the church has existed for many centuries, being in existence in 1519.

The small hillock and vantage point on which St.Mary’s church tands was probably responsible for the exact location of Hampton town. The population at the time of the Domesday survey in 1086 included only 45 ordinary landholders for Hampton, Hampton Wick and Teddington with a total population of around 200. By 1500 the population of Hampton town and Hampton Wick was around 300/350. By 1600 this had risen to around 600 and after over 100 deaths from the Plague in 1603 the number reached 1100/1200 in 1700. By 1800 the population was around 2500, reaching around 4800 by 1850 and approximately 9400 by 1900.