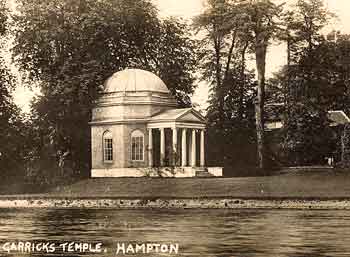 Hampton had a couple of famous residents in David Garrick the actor and John Beard the tenor. Garrick had acquired Hampton House (now Garrick’s Villa) in 1754 and lived there until his death in 1779, with his widow continuing to live there until 1822. John Beard acquired Rose Hill in 1774 and died in1791. There were other large houses occupied by lesser known people but in 1801 there were still only 134 houses. In Hampton most of the land was used for farming and grazing. Hampton Wick was even smaller and most of the land was fields.