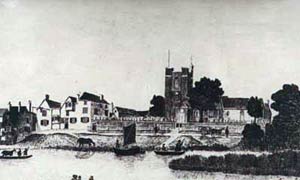 The coming of the railways to Hampton in 1864 was ultimately to lead to further growth although this did not start immediately. Much of the land at this time was still used for grazing and farming. During the 1880’s market gardening began to flourish in Hampton and by 1900 there were 32 nurseries. In 1897 the Earl of Carlisle decided to break up the Manor House Estate in Hampton. Although the lots of land sold slowly, initially, this action released large areas of land for development and this was to fuel the subsequent growth of Hampton.

The church and the vestry had run parish affairs for centuries but in 1858 an Act was passed that allowed areas to elect local Boards. This was to prove to be the beginning of something much closer to local government as we know it with much greater powers than the vestry had previously had. One of the greatest differences was that local boards could borrow money, rather than exist on the more hand to mouth, year by year approach that had prevailed in former times. This, in turn, meant that local boards could undertake capital projects such as sewage disposal, drainage and street lighting. To form a Board a simple majority of ratepayers had to vote in favour of such action. In 1863 Hampton Wick voted to form its own Board but it was a different story in Hampton.

In 1865 a poll was held but the voting was two to one against forming a Board. However, in 1872 Hampton had no choice but to be part of the Kingston Rural Sanitary Authority as a result of the Public Health Act of that year. This in turn led to a change in attitude, as Hamptonians had no desire to be told what to do by authorities in Kingston on any matter. A further vote was held in 1884 and although the vote was in favour permission was not granted to form a board on the grounds that Hampton was too small. After the Middlesex County Council was formed in 1888 an inquiry was held and as a result a local board for Hampton was formed in 1890. 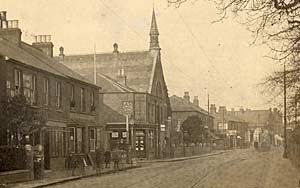 New Hampton also changed its name to Hampton Hill at this time. The Board was very short-lived, however, as it became an Urban District Council in 1895.

Despite this brief existence some reminders of the Board still exist to this day in the form of a number of drain covers around Hampton on which “Hampton Local Board” is still visible.