A SHORT HISTORY OF HAMPTON
by John Sheaf

The Anglo Saxon parish of Hampton included the areas now known as Hampton, Hampton Hill and Hampton Wick. The name Hampton itself is believed to be derived from the Anglo Saxon words “Hamm” meaning a large bend in a river and “Ton” meaning “settlement”. Hamtone as it was then called is mentioned in the Domesday Book of 1086. “Wick” means a dairy farm and Hampton Wick was previously known as “Wica” in the thirteenth century and also “Hampton La Wyke”. Hampton Hill is a much more recent name, the area being previously known as “The Common” in a Parliamentary survey of 1650 and from c.1800 as New Hampton. The name Hampton Hill came into use around 1870, although the “official” name change was in 1890. 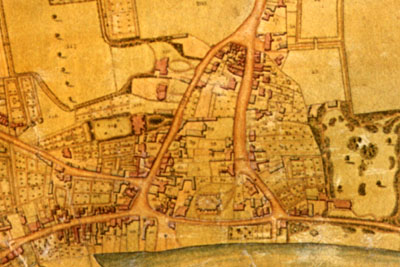 The main outline of the modern road plan of Hampton was determined many centuries ago. This was dictated by the three through roads as well as the tracks that led to the fields.

The triangle of roads formed by modern-day Thames Street, Church Street and part of the High Street, which formed the core of the ancient settlement of Hampton would have probably been familiar 500 years ago, although the “roads” would have been narrow, badly drained tracks. The other dominant features of the landscape were the ancient fields and the trackways across the fields. Many of these ancient boundaries and field outlines can still be traced in the course of the principal road patterns and layout.

Read more about Hampton through the ages: